One of the unexpected pleasures of the Private Eye subscription I gave my husband for his birthday (there’s nothing a present you’re going to enjoy yourself) is their books pages.  There are wonderfully un-sycophantic reviews, literary gossip, and cartoons including a brilliant series called First Drafts which most writers are going to be able to relate to in one way or the other.

I find first drafts murder anyway, as I get older and more and more critical they’re harder and harder to write and description is particularly difficult.  I was trying to discover what sort of state a body would be in after it had been buried in the sandy soil of Les Landes for a few weeks so I could use adjectives other than ‘disgusting’ and ‘stomach churning’ when I saw this:

Since I really don’t fancy asking French officialdom about corpses, ‘But why do you want to know this Madame Corby?  Perhaps you’d like to help us with our enquiries…’ doing this is so tempting.

Several years ago my book club nearly had a riot over reading Sir Walter Scott’s Ivanhoe with at least one member threatening to resign if we ever had another book by Scott.  We’d all agree that Scott’s many books would have been much improved if he’d taken the hint below:

I wish I’d seen it when doing the book bunting for the Book Club 10th birthday party, it would have gone nicely alongside the cover of Ivanhoe.

And no, I haven’t read Fifty Shades of Grey but Susie has and apparently it’s quite something.  Naturally I don’t know what this refers to but I’m sure all of those who spent two days glued to the sofa (even if they won’t admit it) know exactly what this is all about.. 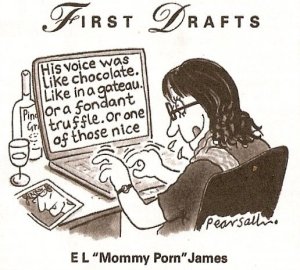