and Les Journées Médiévals were a rip-roaring success.

Despite the weather being so filthy that we couldn’t hand out flyers at all the local markets there was a record number of people there. 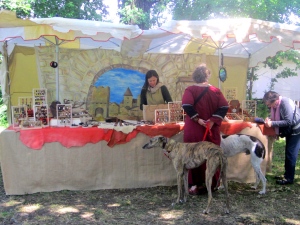 to exotic fruit syrups, medieval clothing, supposedly “medieval” leather wear that wouldn’t have looked out of place in Fifty Shades of Grey, 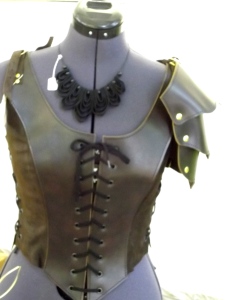 artisanal beer made locally (strangely enough that had a lot of people around it!), a local artist, pottery, manuscript maker, a seller of leather-bound dream books, all the gear a small wanna-be medieval soldier could want

though sometimes it took a long time to make up minds about what colour of sword to have.

The blacksmith was doing his stuff and it seems impossible to think that this elfin creature (she comes up to my shoulder) is a stone mason and worked on the restauration of the doorway at the château.

Lots of people came dressed in the spirit of the day; 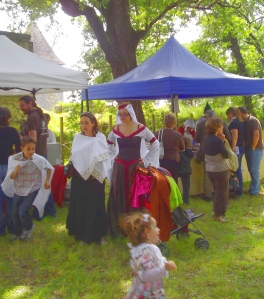 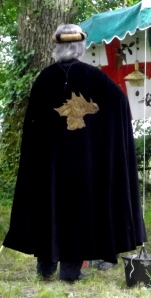 This gentleman turned up in a car with “Mage” written across the back.

Over in the medieval camp by the castle there was fighting going on, 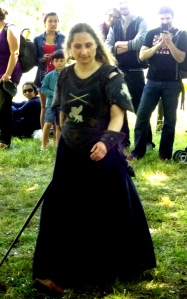 This lady could have been the inspiration for ‘kick ass female’, her opponents never seemed to win.

and in getting on with people…

Lots of people got to try their hand at archery (more of that later!)

and much use was made of the rack

And one of the most pleasing things of all: the rescue association for the galgos, Spanish hunting dogs that are treated appallingly, was there.

These dogs are so loving, so forgiving, and there are associations all over France desperately looking for homes for them.  One of my daughter’s friends adopted little Cara, the smallest of the galgos,

All being well Cara starts her new life next weekend.