France has a great library service, even tiny villages often have some form of library.  Admittedly the one in our commune, pop 276, is staffed by volunteers, is only open once a month and doesn’t have a huge amount of books but it’s the principle that counts.

On a visit to the Parc Riviere in Bordeaux this week we came across this:

It’s a boite a lire where you’re invited to ‘liberate’ your books and magazines and leave them for someone else to read.  Or you can take one home to read for yourself.  Or browse a book while lying on the grass in the sunshine of course.

There’s a whole lot more of these distributed around Bordeaux.  What a wonderful, generous and uplifting idea!

…the weather has to be truly horrible not to get a rush of pleasure at the sight of the waterfront, the pont pierre, the stunning miroir d’eau on the quais in front of la place de la Bourse and so much else that makes up my adopted city.

Though I should think that the tourism office of Toulouse might be a little teed off at the music to this video – Toulouse is known as the Ville Rose because of the pinkish brick of many of its houses.  Perhaps there is no such thing as honour amongst tourist departments.

Such a nice group of young people

The middle daughter took part in Bordeaux’s second Zombie Walk yesterday.  It’s a gloriously silly event where lots of the young, and not quite so young, splatter themselves liberally in fake blood and other gory acoutrements and gather in the Place de la Bourse, before lurching around the streets of Bordeaux hoping to scare the living daylights out of passers by, well give them a little bit of a frisson, as well as a giggle.  The walk had been quite well reported in advance this year so there weren’t a lot of people who were very surprised at seeing that the undead had invaded rue St Catherine.  Last year when it was just a Facebook event that took off the zombies apparently scored some real results especially when they surrounded a tram and started rapping on the windows. 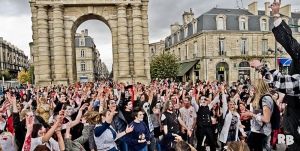 It’s all fun and very good humoured, though the daughter said that the proprietor of the bar where she and a group of friends stopped off for a drink did seem a little worried that they might be driving away customers.  However the most surprising thing about the whole even is how many men tried to hit on my daughter; they were shoppers too, not fellow zombies.

Of course my daughter is beautiful, charming, witty etc and I’m never surprised when she attracts attention but even maternal prejudice has a limit.  I can see that there’s really a delightful girl here, but honestly if I had a son and he decided that this was his idea of a dream date I’d be more than a little worried.

The ideal daughter in law?