France has a great library service, even tiny villages often have some form of library.  Admittedly the one in our commune, pop 276, is staffed by volunteers, is only open once a month and doesn’t have a huge amount of books but it’s the principle that counts.

On a visit to the Parc Riviere in Bordeaux this week we came across this: 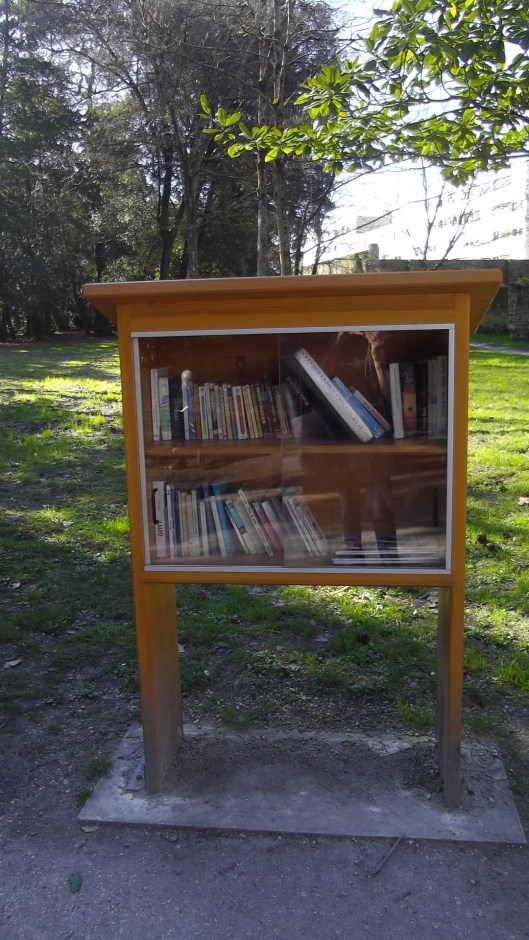 It’s a boite a lire where you’re invited to ‘liberate’ your books and magazines and leave them for someone else to read.  Or you can take one home to read for yourself.  Or browse a book while lying on the grass in the sunshine of course.

There’s a whole lot more of these distributed around Bordeaux.  What a wonderful, generous and uplifting idea!

The bad weather saw itself out last week with a lightning strike on the house resulting in two terrified dogs and one fried Livebox.  The dogs were sorted by lots of cuddles and early tea but the Livebox was way beyond Mrs Corby’s repair service and we had to wait for the technician from France Telecom.  And wait.

It was rather relaxing being without the internet, it’s amazing how much writing you can get done when you aren’t checking Facebook, reading other people’s blogs or the Daily Mail online and there was a glorious moment when we bought a paper after four days of not being able to check the weather forecast online.  The five days ahead didn’t have the usual sharply slanted dark raindrops ranged over the Gironde, there was an unbroken line of fluffy yellow tennis balls instead.

The dogs expressed their pleasure in the sudden change in temperature;

Sadly I’m beyond the age of copying them, I might not be able to get up again.  Walking around outside in trainers rather than clumping about in gumboots felt so liberating and after three months of going out because the dogs needed exercise and not for pleasure and with eyes blanking out the grey sogginess all around, it’s astonishing how much you actually see once the sun shines warm on your face.

I’m sure these buttercups in our neighbour’s vines that look as if they’ve been deliberately planted between the rows didn’t actually appear overnight but it seems so; 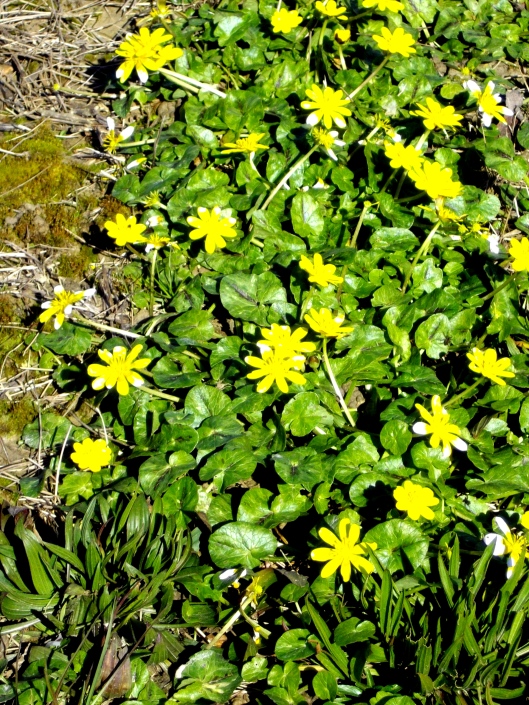 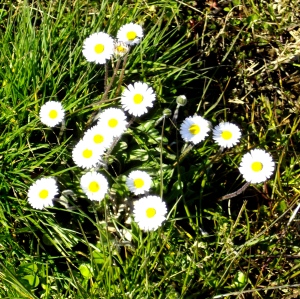 I’ve passed this tree  with its ruined palombiere countless times but had never gone up close before.

A palombiere is a hide where hunters gather to shoot palombes, migrating pigeons, during a short season in October and March.  Some are high up in trees like this one though they’re usually on the ground.  Those ones can be huge, covering several hundred square metres and are sometimes fantastically elaborate.  it seems that a lot of the palombieres are the French equivalent of a garden shed, a place to get away from the womenfolk for men will spend a large part of the spring and summer maintaining and improving the structures and most of the season waiting in the hides for the pigeons to go over (which doesn’t happen that often), their vigil accompanied by large quantities of food and even more drink.  However the oft-repeated shibboleth that all French hunters are drunk all the time can’t be true; the palombieire near our house was still being used when we moved here in 2008, the hurricanes of 2009 and 2010 put paid to it, and the hunters used to climb up to their platform using this: 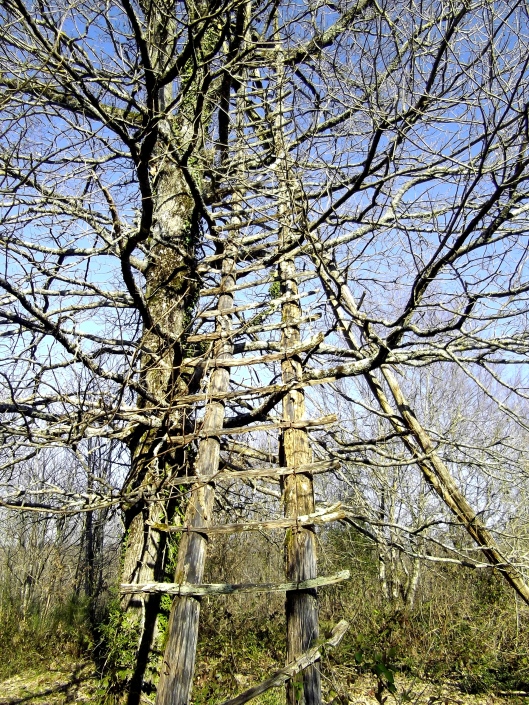 I don’t believe it’s possible to get up this if you aren’t sober.  And did anyone ever try to do so when he was drunk?  I checked around the base of the tree and didn’t find any small crosses with arrangements of plastic flowers so I presume not.

Then onto another patch of vines where we haven’t been for ages because it’s just been too soggy and there were grape hyacinths, muscari, growing wild all over the place. 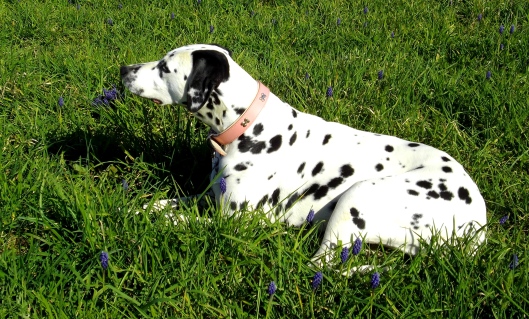 We now have a little of the outside is now on our kitchen table.

The only disadvantage to this glorious weather is that it’s no longer possible to go on ignoring the garden on the grounds it’s just too unpleasant to go outside and I’m going to have to stop merely admiring the beauties of nature and get down to some serious weeding, chopping, tidying…

Tomorrow maybe, for now I’m just going to admire the still unusual sight of the effect of sunlight on the trees.