A few weeks ago I had an unpleasant revelation while getting re-aquainted with my summer wardrobe.  The type of revelation that makes you turn on your OH and demand to know why he didn’t warn you that all those crisps were not a good idea.  His defence was that he hadn’t been prepared to risk his life by addressing me with, ‘Hey Porky…’

To be honest I wasn’t that fat, if I was smaller I could probably have been described as cuddly (just) but I’m tall and broad shouldered and tall women don’t do cuddly.  We’re lucky in that we can continue to give the illusion of being slender even when we’ve packed on some weight, the downside is that when you cross the line you go straight from being slim to being big.  I prefer being slim to resembling a battleship in full sail so I had to do something about it.

Dieting might not be fun but to be honest it’s a bit of a no brainer.  The most difficult part is convincing yourself that the gain is going to be worth the pain.  The summer wardrobe debacle made that part easy, very easy.  Then it’s a question of banning stuff like crisps and nuts, cutting down on some of the more calorific foods and reducing portions.  Simple…  Oh and cut out booze.

I wouldn’t call myself an alcoholic or anything, of coursh not, but there’s no doubt that I drink rather more than the health Nazis deem is suitable for a woman.  I think the limit is down to about half a glass a week.  I don’t give a toss about going without puddings, or having less bread and spuds but I drink wine because I like the taste and, as far as I’m concerned, there aren’t any proper substitutes.  The only carbonated drinks I like are, very occasionally, Bitter Lemon or Orangina – the full sugar versions which don’t do anything for your figure and anything with artificial sweeteners is disgusting.  I quite like San Pellegrino with lime juice but frankly San Pellegrino is even better with a good dollop of white wine.  Water may be the best when you’re thirsty but let’s face it, as an accompaniment to a meal it’s boring. 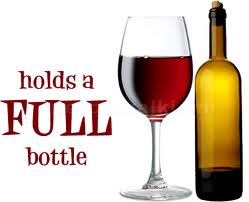 My kind of glass…

So I turned to psyching myself up with the health angle.  You get bombarded with so many health messages about what damage alcohol does too you that it’s quite easy to start thinking that every minor ailment will improve if you go on the wagon.  You’ll sleep better, your concentration will improve, skin will glow, you’ll stop catching minor infections, you won’t get dehydrated, you’ll really go up in the OH’s good books because you’ll be the driver without complaining.

And is it all true?  The last is without doubt.  The rest well; my skin is better but it is summer so that’s to be expected, I’ve never slept well and I don’t think not drinking makes any difference at all, of course I’m not dehydrated, I’m drinking all that blasted, boring water and my bad hip has been good but then it is summer.  As far as my general health is concerned that’s another matter.  I’m someone who, when everyone around me is flattened with flu like colds, gets a minor sniffle for 24 hours, I get a proper cold about every four years and even then it only lasts for a couple of days and I hadn’t had a cough since I gave up smoking 18 years ago.  In the last alcohol-free weeks I’ve had a cold that lasted 10 days, followed a week later by a cough that made me sound as if I was a candidate for the TB sanitorium.

Much of the overhang that caused so much grief when I got the summer skirts out had gone so I returned to having the odd tipple or two.  The cough disappeared entirely – so did another 2 kilos.

13 thoughts on “The Demon Drink”